The Hurun Research Institute today released the Hurun Richest Self-Made Women in the World 2021, a list of the self-made women billionaires in the world. This is the 11th year of the list. Wealth is a snapshot of 15 January 2021, drawn from the recently released Shimao Hong Kong Zhuhai Macao Port City · Hurun Global Rich List 2021.

CHINA HAS TWO-THIRDS OF THE WORLD'S MOST SUCCESSFUL FEMALE ENTREPRENEURS with 85, MORE THAN THREE TIMES THE USA (25) in second; UK THIRD WITH 6. ONLY ONE OF THE TOP TEN IS NOT FROM CHINA

TOP TWO ARE FROM JIANGSU: ZHONG HUIJUAN, 60, OF drug maker HANSOH, WORLD'S MOST SUCCESSFUL FEMALE ENTREPRENEUR FOR THE SECOND CONSECUTIVE YEAR WITH US$23BN, up 53%

WU YAJUN, 57, OF property developer LONGFOR, dropped down to third place, despite wealth up 21% TO US$17BN

43 new faces, of which 33 from China. first was kate Wang Ying, 39, of e-cigarette brand RELX shot straight into 8th place with US$11BN, becoming world’s most successful woman under 40yrs; second was Pan Dong, 56, of detergent maker Blue Moon with US$10BN

BEIJING IS self-made woman billionaire CAPITAL OF THE WORLD with 16. shanghai ranked 2nd with 11; shenzhen and hangzhou tied for 3rd with 10. GUANGZHOU SURPASSED LONDON TO ENTER THE TOP FIVE WITH 7

HEALTHCARE AND ADVANCED MANUFACTURING were main sources of wealth, WITH 17 AND 16 billionaires; E-COMMERCE up BY 4 TO 7 to stay in 3RD.

of TOP 20 RICHEST WOMEN IN WORLD, 6 FROM CHINA. 5 are SELF-MADE AND 15 INHERITED. compared with 20 RICHEST MEN IN THE WORLD, 16 are self-made and 4 inherited. 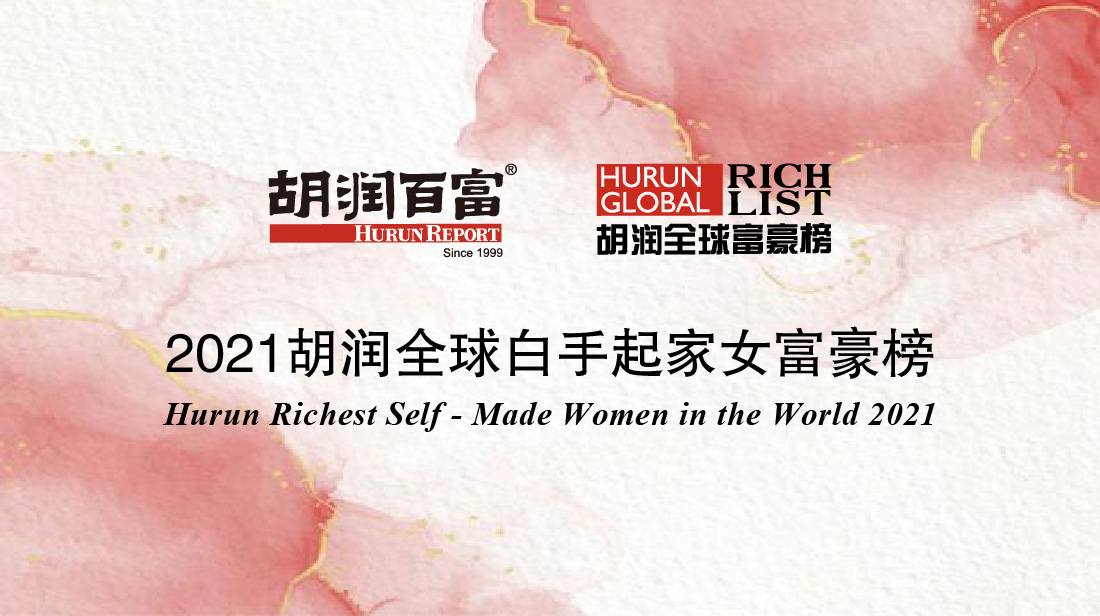 ·       Hurun Research Institute found 130 self-made female entrepreneurs from 16 countries around the world, an increase of 30 from last year.

(19 May 2021, Shanghai) The Hurun Research Institute today released the Hurun Richest Self-Made Women in the World 2021, a list of the self-made women billionaires in the world. This is the 11th year of the list. Wealth is a snapshot of 15 January 2021, drawn from the recently released Shimao Hong Kong Zhuhai Macao Port City · Hurun Global Rich List 2021.

Rupert Hoogewerf, chairman and chief researcher of Hurun Report, said, “This past year has been the most successful year for women billionaires in history. There are 30 new self-made female entrepreneurs with a billion dollars, double that of five years ago and more than 100 more than ten years ago.”

“If you want to understand the spirit of the most successful women in business alive today, you must start from China. Each year for the past ten years, China has accounted for two thirds of the world's most successful women billionaires. Once might be lucky but not eleven years on the trot. This is no longer luck. Nine of the Top 10 and eight out of ten new faces come from China.”

"The stories of these women tell the story of the most successful women in business. Their stories are worth learning.”

Zhong Huijuan, 60, is the world's most successful women entrepreneur for the second year in a row with US$23bn, up 53% in a year dominated by Covid-19. Hansoh’s main business is in the central nervous system, anti-tumor, anti-infection, diabetes, digestive tract and cardiovascular fields. With two R&D centers located in Lianyungang and Shanghai, Hansoh has a team of 1200 R&D staff. Hansoh was 53rd in the Hurun China 500 Most Valuable Private Companies 2020. Husband Sun Piaoyang of Hengrui also has US$20bn, from his share of China’s largest pharma platform Hengrui.

Fan Hongwei, 54, was 2nd with US$22bn, up four places and 189% from last year. Hengli has been a winner of the China government’s ever more stringent environmental policies, growing into China’s largest fibre producer, used mainly for the apparel industry.

An alumni of the well-known Northwestern Polytechnical University, Wu Yajun, 57, was down one to 3rd with US$17bn, up 21%. Longfor Real Estate is one of the most valuable real estate developers in the world, ranking 384th in the 2020 Hurun Global 500.

Lu Zhongfang, 79, was up four places to 5th with US$15bn, double that of last year. Offcn's core business is recruitment and training for public occupations. Its teaching network covers more than 300 prefecture-level cities in China. It has more than 1,000 directly operated outlets and provides comprehensive vocational training services for more than 100 categories. Offcn ranked 472nd in the 2020 Hurun Global 500.

Kate Wang Ying, 39, an alumnus of Xi'an Jiaotong University, broke straight into the Top 10 for the first time with US$11bn. In 2018, Wang Ying founded vaping brand RELX and in just three years has grown it into a Hurun Global 500 company with a market value of over US$30bn. Wang holds 34% of the company's shares, of which just under half has been earmarked for employee incentive plans. Before founding RELX, she held leadership positions in Uber and Didi, and served as a consultant at Bain & Company.

UK-based Denise Coates, 53, of gambling platform Bet365, became the only non-China entrepreneur to break into this year’s Top 10 spot, as her wealth more than doubled to US$10.5bn. Coates is best-known in the UK as being the highest individual tax payer, paying close to US$1bn in taxes last year.

Pan Dong, 56, an alumnus of Wuhan University, made the list for the first time with US$10bn, ranked 10th. Blue Moon was founded in 1992 and has three series of products including clothing cleaning care, personal cleaning care and household cleaning care. Last year, it listed on the Hong Kong Stock Exchange.

TABLE: Compared with 5 years and 10 years ago

‘US Construction Queen’ Diane Hendricks, 73, of ABC Supply dropped down 8 places and out of the Top 10 after her wealth rose by ‘only’ 9% to US$8.9bn. Starting out originally as a real estate broker, Hendricks with late husband Ken, founded ABC Supply as a wholesale distributor of roofing, windows, gutters, and siding for residential and commercial buildings. Hendricks is well-known locally for donating to the city of Beloit, Wisconsin, her adopted hometown.

The 54-year-old Luo Jinhong's wealth increased by 236% from last year to US$4.7bn, mainly due to the rise in the share price of the listed company Eve Energy. Eve Energy's main business is consumer batteries and power batteries. Last year, global passenger car electrification accelerated the implementation of the superimposed policy, and the stock price of Eve Energy soared. Eve Energy ranked 100th in the Hurun China 500 Most Valuable Private Companies 2020.

California-based Peggy Cherng, 73, of US fast-food chain Panda Express, made the list with US$3.5bn. Panda Express today has over 2000 restaurants.

Gong Yingying, 37, made the list for the first time with US$3.3bn. Established in 2014, Yidu Tech is a medical technology company that provides solutions based on big data and artificial intelligence technology. It provides services for medical-related industries. It was listed in Hong Kong in January this year.

Moscow-based Tatyana Bakalchuk, 45, of Russia’s largest online retailer Wildberries, saw her wealth almost triple to US$3.2bn. In 2004, while on maternity leave, she founded Wildberries from her Moscow flat, using her savings of US$700 and has since expanded to Belarus, Kazakhstan, Kyrgyzstan and Armenia.

Yang Lijuan, 43, made the Top 50 with US$2.5bn, an increase of 150% over last year. Yang is currently the COO of Chinese hotpot restaurant chain Haidilao and was 7th in the recently released Hurun China Richest Professional Managers 2021. Yang started out as an ordinary waiter. Haidilao ranked 447th in the 2020 Hurun Global 500.

Yang Yunyun, 44, made the list for the first time with US$1.9bn. In 2002, Yang started a retailing platform Miniso with husband Ye Guofu. Miniso was listed on the New York Stock Exchange last year.

The youngest self-made woman billionaire in the world, Texas-based Whitney Wolfe Herd, 31, of dating app Bumble, made became a billionaire and today has US$1.7bn. Marketed as allowing women to make the first move, Bumble is now worth US$8bn with 100million users.

LA-based Geeta Gupta Fisker, 47, of EV maker Fisker broke into the Hurun Global Rich List for the first time with US$1.2bn. A graduate of the University of Delhi, Fisker and husband Henrik launched the business in 2016 and are developing an all-electric sedan with a 400-mile range.

San Francisco-based Jayshree Ullal, 60, of Arista Networks, a cloud networking company responsible for the deployment of Gigabit Ethernet networking in the data centres, made the list for the first time with US$1.9bn.  Arista has grown to revenues of US$2.4bn.

Radha Vembu, 48, of India’s top cloud company Zoho Corporation, made the list with US$1.7bn. Established in 1996 with zero outside funding, Zoho has more than 10,000 employees and generates a yearly revenue of nearly US$500 million.

Judy Faulkner, 77, of healthcare software platform Epic Systems, dropped down 12 places with US$4.4bn. Started with US$70,000 from friends and family, Faulkner has grown Epic Systems into handling the medical records of 200 million Americans and with 10,000 staff. Faulkner’s next mission is to create an ‘Alexa’ equivalent that would completely free the doctors from feeding data using keyboards.

Lynda Resnick, 77, of Fiji water owner Wonderful Company, was up 12% to US$2.9bn. which includes brands such as Fiji water entered the Hurun Global Rich List 2021. In September 2019, Resnick and husband Stewart pledged US$750 million to Caltech, comprising of a US$400 million gift and a US$350 million sponsored research agreement to support environmental sustainability research.

Facebook COO Sheryl Sandberg, 51, was up 9% to US$2.4bn. Starting out with Google, Sandberg became the first female board member of Facebook. 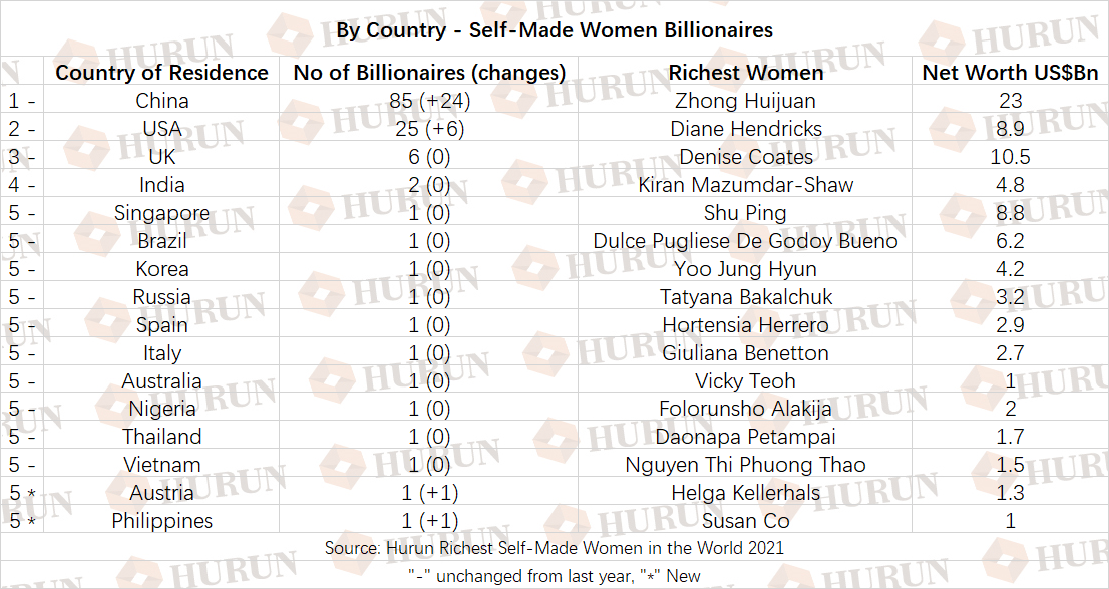 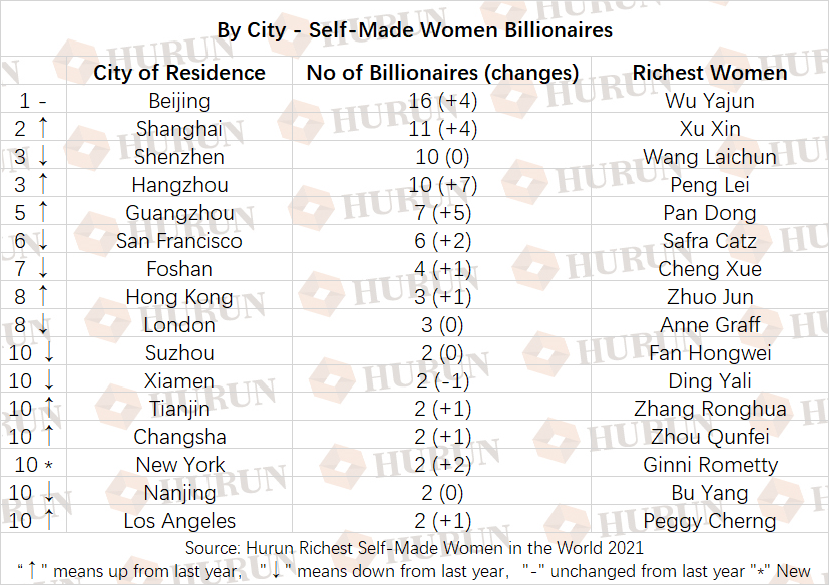 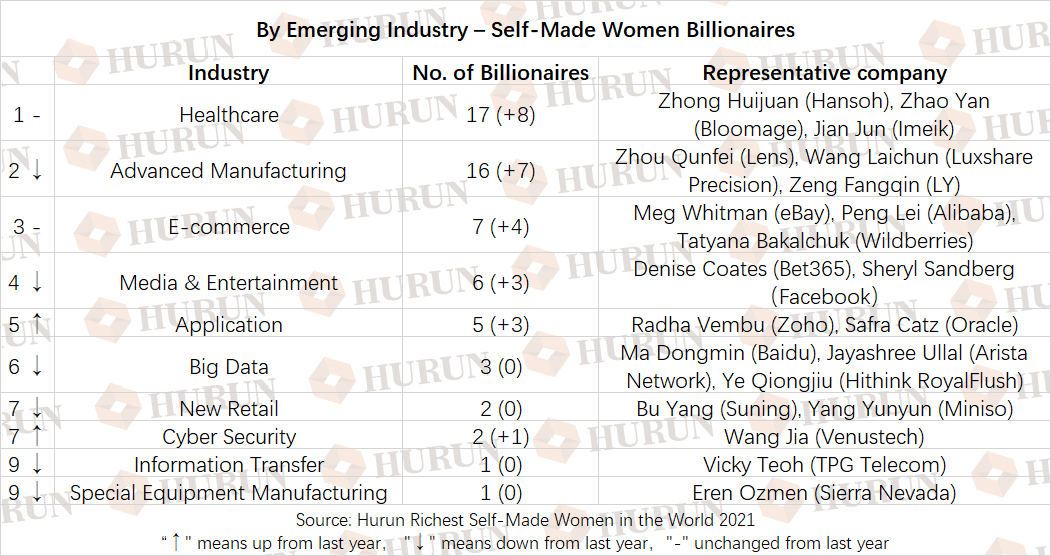 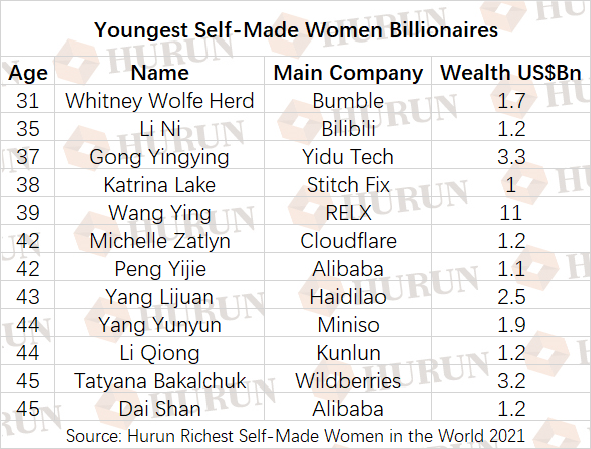 Alice Walton, 71, eldest daughter of Walmart founder Sam Walton, is the richest woman in the world with US$74bn, followed by L'Oreal’s Francoise Bettencourt Meyers, 67, with US$66bn. MacKenzie Scott of Amazon was 3rd with US$61bn. 6 of the Top 20 are from China. 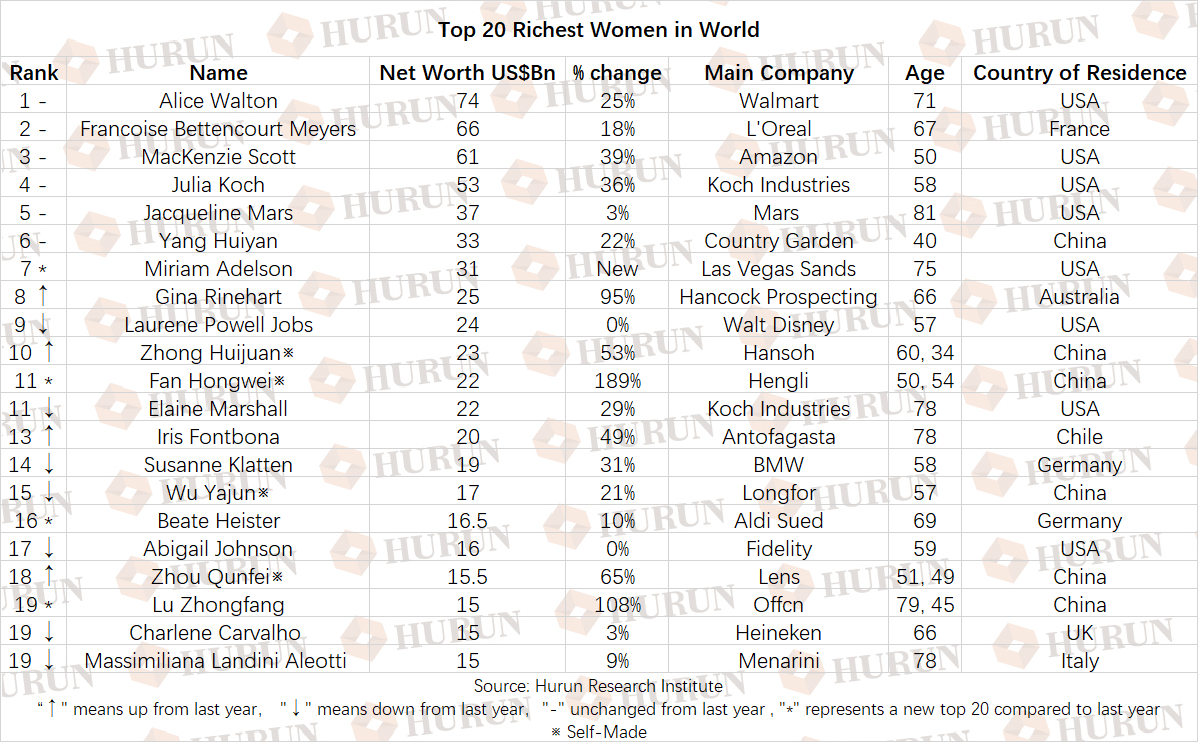 Wealth valuations are from 15 January, from the Hurun Global Rich List 2021, released on 2 March 2021. Putting together this list of the world’s most successful women in business is always a challenge. For many spouses of billionaires, the shares are owned in the husband’s name, such as Bill Gates or Mark Zuckerberg, but the donations are done in both spouses’ names: Bill and Melinda Gates, Mark Zuckerberg and Priscilla Chan.  For the purpose of this list, we have separated out the wealth of the women.  In the case of Robin Li Yanhong and Melissa Ma Dongmin of Chinese search engine Baidu, for example, we can see the individual shareholding of Melissa Ma, so we have valued her independently.  In the case of Peggy and Andrew Cherng, we can see both their names on the shareholdings but are not able to determine their value independently, so we have assumed they own 50% each.

Established in the UK in 1999, Hurun is a research, media and investments group, which generated 8 billion views on the Hurun brand in 2020, up 50% year on year, on the back of providing lists and research reports.

Best-known today for the Hurun Rich List series, ranking the most successful entrepreneurs in China, India and the world, Hurun’s other key properties include the Hurun 500, a ranking of the world’s most valuable companies, and the Hurun Unicorn Index, a comprehensive listing of the world’s start-ups worth US$1bn or more.

Keywords：Richest Self-Made Women in the World